Our days in Bologna and around the Emilia-Romagna region were incredible, being honest we never imagined we would fell in love with one of the most “unknown cities” in Italy. We put it between ” because actually, Bologna has always been a cultural centre and an important city but somehow seem to be a little bit forgotten from tourists.

We were along the area about a week, and when we told our friends we were travelling to Bologna most of them asked incredulous “Bologna? is there anything to do there?” HELL YES! there are many things to do, to see, to eat… (to eat again…)

The city location makes it especially easy to move around, reaching other small cities such as Ferrara or Ravenna are only 40 min away on a short train so choosing Bologna as your main operations base is a great idea.

How to move around Bologna

From the airport to the city centre:

Sadly there is only one bus doing this route and as usual, when this happens it’s overpriced. The ticket is 6€ per person for about a 30 min ride. You can get the ticket either from the machines in the airport or from the bus driver.

Keep care! The machines are kinda tricky, sometimes they don’t give you the change back right there (supposedly they can only give you a maximum of 8€ back but anyway, this also fails) if this happens don’t panic, the machine will print a ticket with the owned amount and you will have to change it for your money at the central Tper station (located at the last bus stop)

The company handling the city transport is Tper, the single tickets can be bought inside the bus or at the tper offices -such as the one mentioned above- the other tickets can only be bought in the ticket offices.

If you are thinking about staying longer you might want to consider the monthly ticket -personal and non-transferable- for 36€ (27€ if you are under 27 y.o)

Each ticket is valid for 75 minutes in all the lines, including changes.

Another way to move around is renting a bike, we got ours from Dynamo, pretty close to the central station. For 15€ a day you can get a nice bike and feel like home (12€ if is two days 10€ if is three or more)

Also, there is a bar inside the Dynamo station, pretty cool atmosphere and nice aperitivo and music -just in case you want to have a rest after giving the bike back- and hey, the place is open till 11 pm.

Things to do in Bologna in 3 days

Bologna University is the oldest one in the occidental world, yes, you heard right, the oldest, founded in 1088 is still nowadays one of the most important in Europe. This makes Bologna a university city full of students coming and going, is also a pretty popular destination for Erasmus students.

Wandering around the are is breathing life, feel free to sneak inside the buildings, no one really cares as soon as you respect the place and are not too loud. If you do so you might find real treasures, lovely gardens and calm places. If you like to drink in the street then don’t miss this part of the city at night, some squares are full of people chatting and having fun.

Is also a great place to find cheap food if your budget is low.

You know, having a tower was a symbol of power (well, is) so along the centuries XII and XIII Bologna had more than 100 towers, nowadays only 21 remain and from them, the most famous ones are the Garisenda tower and the Asinelli tower.

Did you know that not only Pisa has a leaning tower? Indeed, Both, Garisenda and Asinelli are not straight and it’s pretty obvious (I made the picture, not that obvious :D). The history of this towers is pretty particular, first of all, they are known as “The two towers”, when they were built they had the same height: 60m but in the XIVth century Garisenda tower was cut to avoid it’s demolition (because of the inclination), her sister had better luck and was extended up to the actual 97m.

Today is possible to reach the top of the Asinelli Tower and enjoy a pretty nice bird view, entry is only 3€ but be mentally and physically prepared for the almost 500 stairs ahead. Is absolutely worth it.

If you want to be effective then don’t hesitate on visiting Santo Stefano, the square where we find the basilica has a particular triangular shape and in it, you will see a tiny entrance of what it seems to be a small and humble church. Once inside you will find a labyrinth where 7 churches connect with each other.

Everything started with the main structure but the church started changing with the time and adding other temples. Nowadays is a lovely and enjoyable puzzle, inside you will also find a nice patio with free wifi and a quiet place to read or chill out. Entry is free.

5. San Luca Sanctuary and the longest portico in the world.

Another high point in the city is the San Luca Sanctuary and in fact the most interesting part in the way that connects it to the city centre. If you like walking then this is a nice way to enjoy the longest portico in the world, about 4km and 666 arcs will be on your journey. Once you reach the top you will enjoy an incredible view. 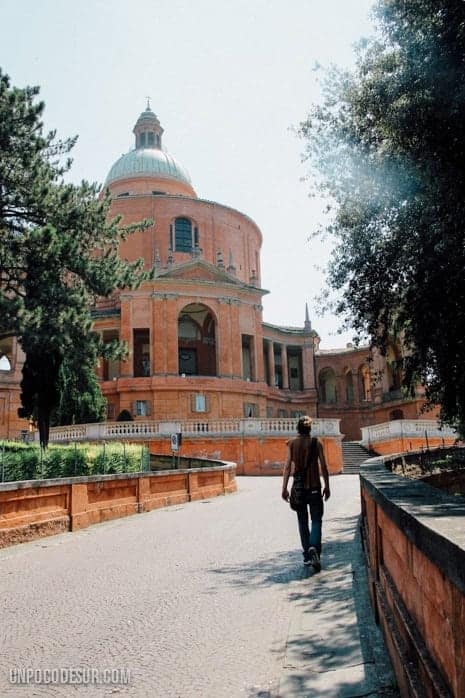 The construction of the way was started in 1673 and wasn’t finish until 100 years later, the idea was the be able to offer the pilgrims a refugee for the abrasing sun and the rain.

Entering the sanctuary is free.

How to reach San Luca

you can walk the way up or down (or both) but if you are a lazy one you can also do both ways in a bus that will bring you straight to the door and to the plaza maggiore. To do that you will need to take the bus number 20 until “Villa Spada” and from there connect with the bus number 58 in “La via di Casaglia” until the end of the line.

The streets around the university quarter are full of murals and graffiti, you will find them in any shape and size.

We can’t forget Bologna is the hometown of Blu, and it was there where his/her murals became famous and until pretty recently we could find around the city more than 20 years of his/her history. Sadly nowadays is only possible to find some of the murals out of the city, but most of his/her pieces have been erased. How come? Bologna started taking profit and selling the city as a cultural and important street art centre, as a protest Blu thought this was not fair and decided to clean all his/her pieces. In his/her own words:

“After criminalising and denounced graffiti as a vandalism act, after oppressing the young culture that created them, after evacuating all the places that worked as labs for artists… Now Bologna pretends to be the saviours of the street art.”

Something similar happened with Blu pieces in Berlin, but this is another story. in any case, even with all this Bologna is full of talking walls for those who want to listen.

7. Pay a short visit to the Ravena Mosaics

If what you need is to leave the city for a while, no problem, walk or take a short bus to the central station and jump on the first train to Ravena, in less than an hour you will be in the city centre. Ravena is beautiful, the streets are narrow and filled with colourful mosaics, is worth to spend at least one day walking around. Just in case you didn’t know, in Ravena, you will have the chance to visit 8 UNESCO buildings with the most impressive mosaics you have ever seen.

8. Go far away from everything and enjoy the little Venice of the Emilia-Romagna 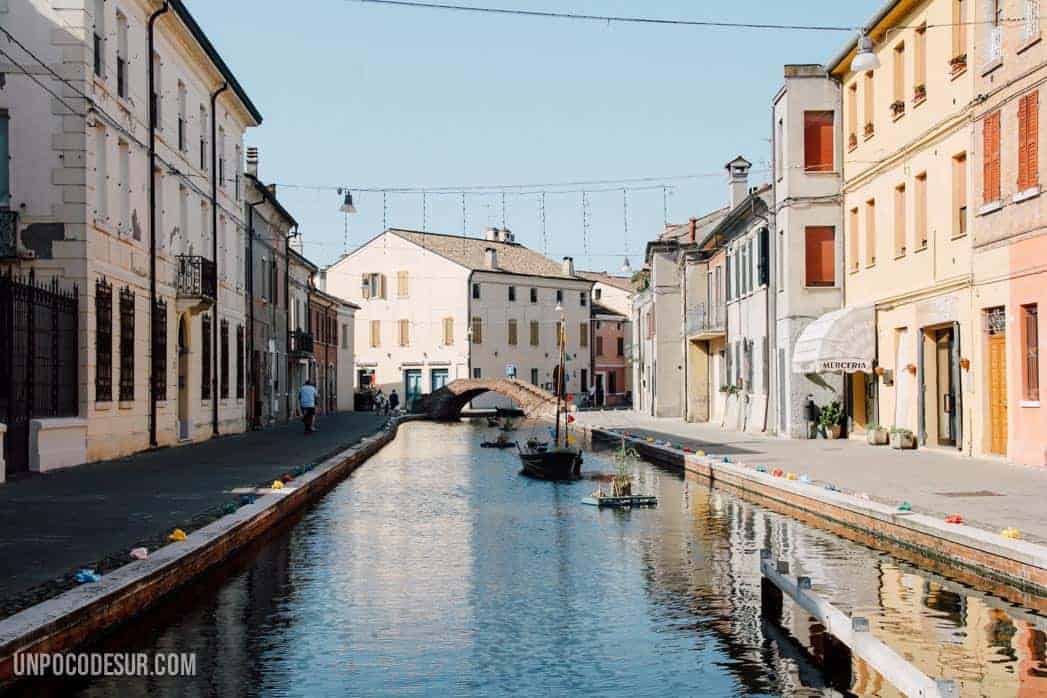 Yap, there is a little Venice close to the city and it’s worth every single minute if your time, is called Comaccio and is surrounded by an amazing natural area known as Delta del Po. If you have more than one day and you want to enjoy a little fresh air and stunning landscapes then head to Comacchio. You will find all the information regarding the area and how to arrive in Comacchio here.

9. Eat, eat until your body says enough (and that will probably never happen)

No surprise one of the city names is “The Chubby”, Bologna and the whole Emilia-Romañan region is for sure a great place to enjoy food and good gastronomy. Modena and Parma are just a few kilometres away and I’m sure you might recall their names from the well-known parmesan cheese or the Modena balsamic oil no? 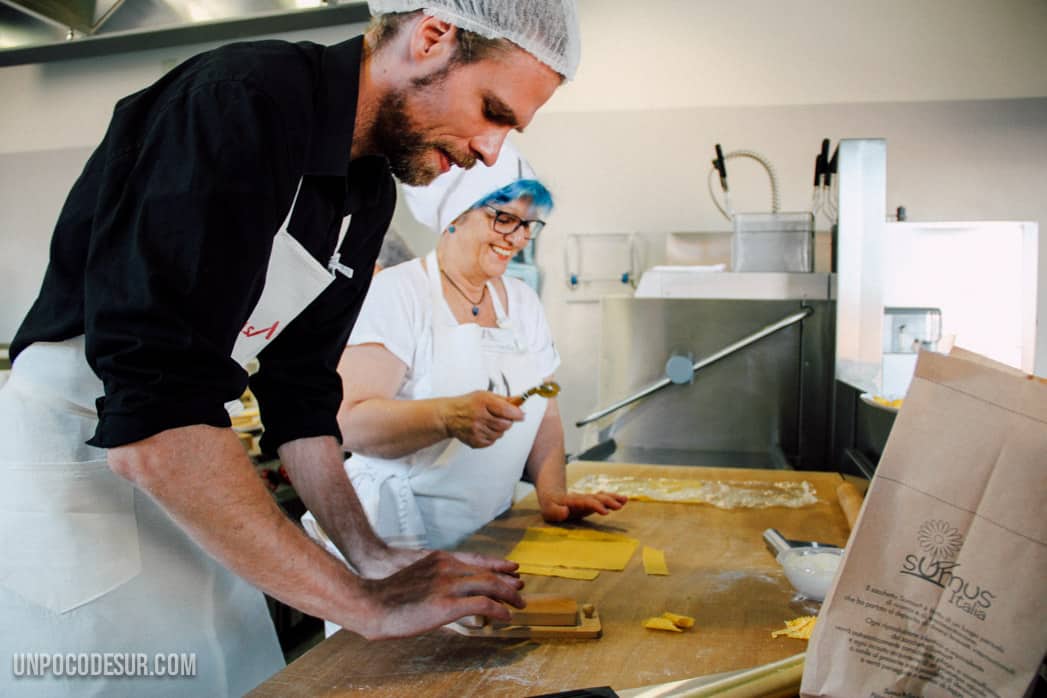 One great plan is learning to cook pasta in a traditional way, meet the real spaghetti at Ragu (not bolognese) and enjoy the aperitif after 6 pm. Eat an ice cream a day (or more) and drink wine until you get bored.

As a small bonus try to find the whispering corner, we are not going to tell you exactly where it is since we had so much fun figuring it ourselves (also the waiter that saw us talking to random walls).  If you whisper from one of the corners against the wall, someone on the other side will hear your message.

As a clue, you will find it close to the Neptuno square.