0
Lee el relato anterior en « Guide: How to buy a motorbike in Pakistan as a foreigner

After the 3 or 4 days that Jesper had to acclimate to drive in the city and a couple of scares driving, we realized things would be harder than we anticipated, let’s remember it was the first time he was on top of I bike an at this point I’ve never been up yet with him on it (which will be our main set up).

Nevertheless, we left Lahore a Sunday at 5 in the morning. Rao showed up at the hostel, helped us prepare the bags a sweet chai of good morning, a cigar and with a clear ” I don’t know what I’ve done ” expression in his face mixed with a “how proud you make me feel guys ” he jumped his bike and we followed him to the exit of the city. There we said goodbye with a bottle of water and as a father who leaves his children in school, he gave us a last hug and a whole bunch of tips in 4 minutes.

It was impossible to hide his concern. We were not going to reveal ours because honestly, we were already on the bike, it was too late for that and to be fair, we both wanted to see how far we would make it. We promised to be in touch and we joked about small reports via WhatsApp, we hugged again and finally got on the bike leaving Rao and Lahore behind.

Our first goal and possibly one of the most difficult rides we would have along all our stay in Pakistan, we would have to cover the distance between Lahore and Islamabad on the first day, together on the bike for the first time, in one day, in the middle of the dry season (47 degrees in Lahore) and in full Ramadan. Yes, we like to dive deep in.

We took it very seriously, we both wanted this to work. The first hour passed almost without realizing, but little by little we were noticing the tiredness. Our first “setup” with the luggage didn’t work out, the small backpack didn’t find its place so we used the stops to stretch the legs and rearrange everything every time. It was fun to catch the curious looks when Jesper provoked when taking the helmet off. 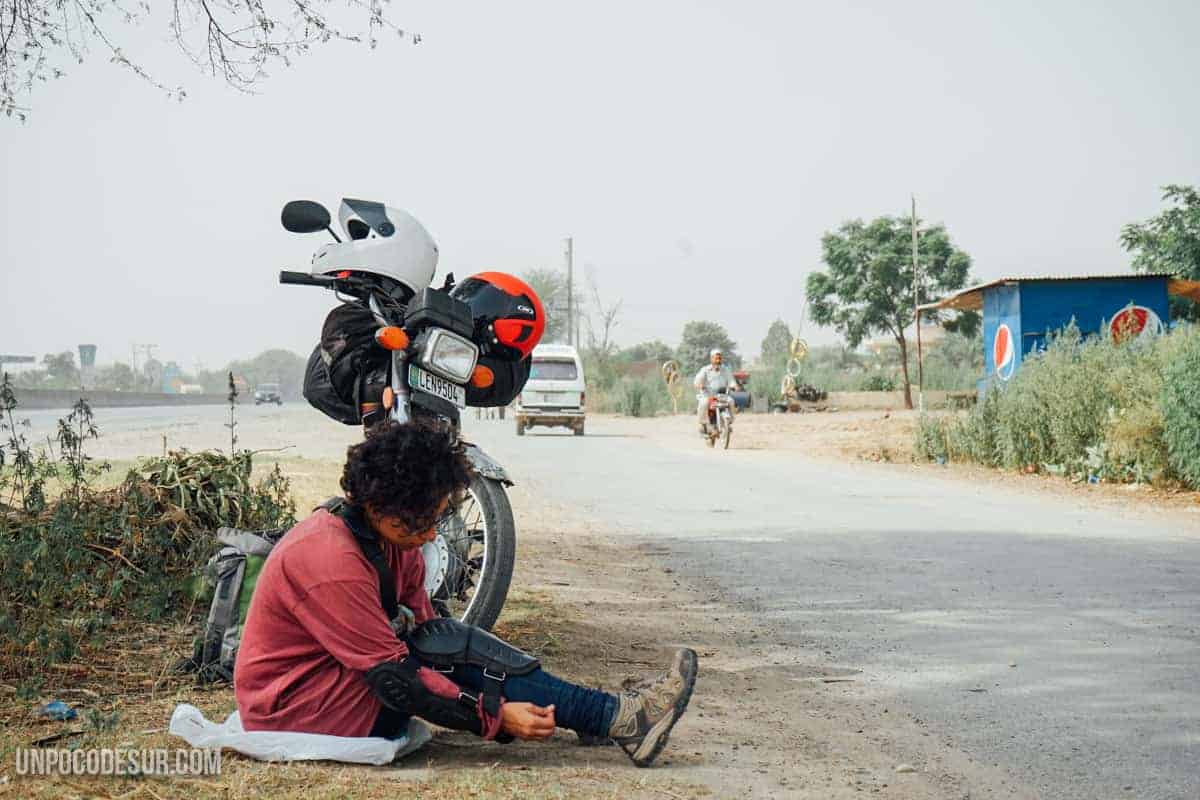 The journey itself happened without much problem, but about 50 km after leaving the city we crossed with a tuk-tuk on the wrong side of the road in the middle of the highway. It was freaking scary to be fair but after some time we forgot that incident and the rest of the day went by with no much to say. The more time we were on the bike, the more comfortable we felt and every minute was a reinforce to the idea of this madness we had decided to put in motion.

Even it was Ramadan we were able to stop in a couple of gas stations to buy drinks and cool down a bit, always respecting all those who were fasting under such infernal, most of the times we hid behind the bathrooms but no one seemed to have an issue with it. It was the first days of Ramadan and the first days of the trip, we had some paranoia about “how would they take it” if they saw us drinking or eating. The reality is that people would often offer us food and drink on the way (even if they didn’t eat or drink) because they were worried about us. It was cute.

We stopped approximately every hour and by 3 pm, sweating like pigs, tired but happy, we arrived in Rawalpindi. The first night we slept it in Pindi since Islamabad, the capital, it’s much more expensive and less interesting. We spent the afternoon taking a shower and calling Muttabhai and Rao to let them know we were alive and celebrate we had achieved it.

We spent 8 hours on the road and was one of the toughest rides of the whole trip, but once the first fire test was overcome we saw ourselves, for the first time, really capable of what we were about to start.

The route that would take us through the north of Pakistan during more than two months and one of the best trips of our lives.

Sigue leyendo en What to do in Pakistan capital city Islamabad »