We left Hormuz island with the idea of visiting our last two destinations in Iran before giving our jump to Pakistan, the cities of Kerman and Bam. It was interesting to leave it to the end since in Kerman we had one the most amazing experiences of the journey: the visit officially the hottest place on the planet. The Lut desert.

From Hormuz, we took a ferry to Bandar Abbas for 140.000 rials for both and from there a common bus (Non-VIP) to Kerman for 420.000 for both. Once in Kerman, we stayed at Omid Guesthouse (in Google Maps Omid Inn), a small hotel quite basic and cheap. We shared a room with another couple for a few days but the place was spacious and we had a fridge and a TV. The hotel is located in an alley, it was hard to find and it was the best we could find for that price range in the area. In addition, the place has a large patio where the shared bathrooms are located. 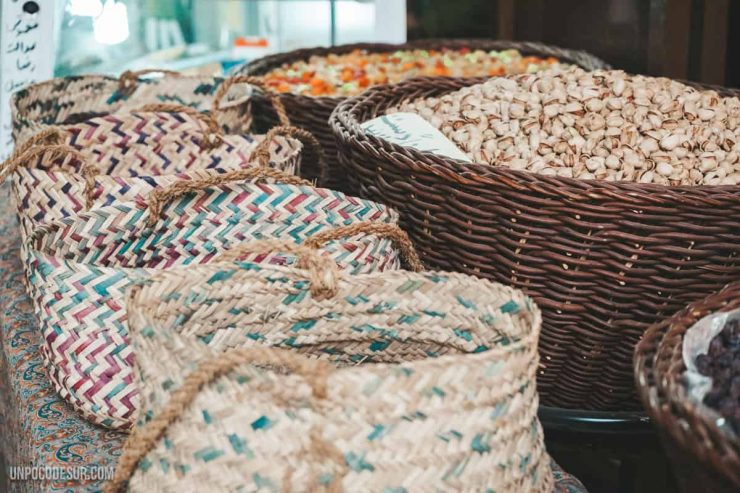 We stopped in Kerman to have a small rest after the adventure and the heat of Hormuz, we were in the city 3 days, two of them working almost full time and catching up and finally, we spent our last day wandering in the bazaar.

We didn’t do much more in Kerman, but being fair it was the Kalouts and the Lut desert, the hottest place on the planet, the main reason we were there in the first place. The desert is located about 125 km from the city and the most common thing to visit the desert is with a tour, they usually offer them from 1 to 3 days. Most of the accommodation offered reminded me a little of the Salar de Uyuni since regardless what you choose it’s quite likely you all end up in the same places so prices do not vary much between an option or another.

While we were looking for a hotel on our arrival to Kerman we crossed paths with a tour that seemed logical, but the best to get the cheapest price per person is to create a full group and thus distribute expenses among all. By then (2017) they offered us a tour for 3,800,000 rials per car (up to 4 people) without including the night in a small accommodation in a village around the area or the tickets to the sites. At that time that meant about 40€ per person.

The tour would take us through Mahan, Rayen and the Colour mountains. We would also stop in some places called “Egghills” and “Salt River” and finally get to the Kalouts by sunset. On the next day, they will bring you again for sunrise to the desert to finally return to Kerman.

The Kalouts and the Lut desert

The next day we left the city with a group we found thanks to Facebook. The first stop would be in the city of Mahan, where the “jewel” of the crown is the Shazdeh gardens. Considering that the entrance is 200.000 rials per person and that we are not highly impressed with gardens, we decided to wait for the rest of the group outside while doing something better to our point of view, taking tea and talking with the rest of drivers who  once drop you on each point take out their hot kettles and cookies and wait for tourists to return to the car.

There we met better Majid, our driver, a 50 y.o a guy with few teeth but lots of joy. For about 40 minutes we were chatting with his almost non-existent English and our similar Farsi and when finally the rest of the group members came back we went out to the next stop of the road, the citadel of Rayen.

The Rayen Citadel is sincerely impressive and although for a moment we thought not to enter, as our next stop in Iran would be the citadel of Bam, I am glad that we finally decided to pay the 150.000 rials ticket since at the end we couldn’t visit the Bam citadel due to other reasons and it would have been a complete shame not to have done either of them. Luckily we had still rials after our 500 € theft in Tehran.

Rayen dates from more than 1000 years ago, and it stood on a trade route of fabrics. It’s a pretty big complex in a surprisingly good condition and you have amazing freedom to explore wherever you want to go.

Before we left to our last stop we made a small stop to eat, Majid took us to a small restaurant on the way where we ate for 130.000 rials each a delicious Ghormeh Zabsi and we continued our way to the most important point of the journey. The Lut desert.

The name given by foreigners comes from its Persian name Dash-E-Loot, which means “the desert of the void “. The desert has been declared a world heritage site and has recorded temperatures of up to 70 degrees Celsius in summer. In its more than 50.000 square meters you will be able to see the Kalouts, those sand structures eroded by the strong wind of the area that will make you feel like in another planet.

Due to the high temperatures, especially getting close to summer the tours offer their visits to see the sunrise and sunset, many cars have problems if the heat catches them unaware and the safety of the visitors could be compromised. Keep that in mind when choosing your operator. 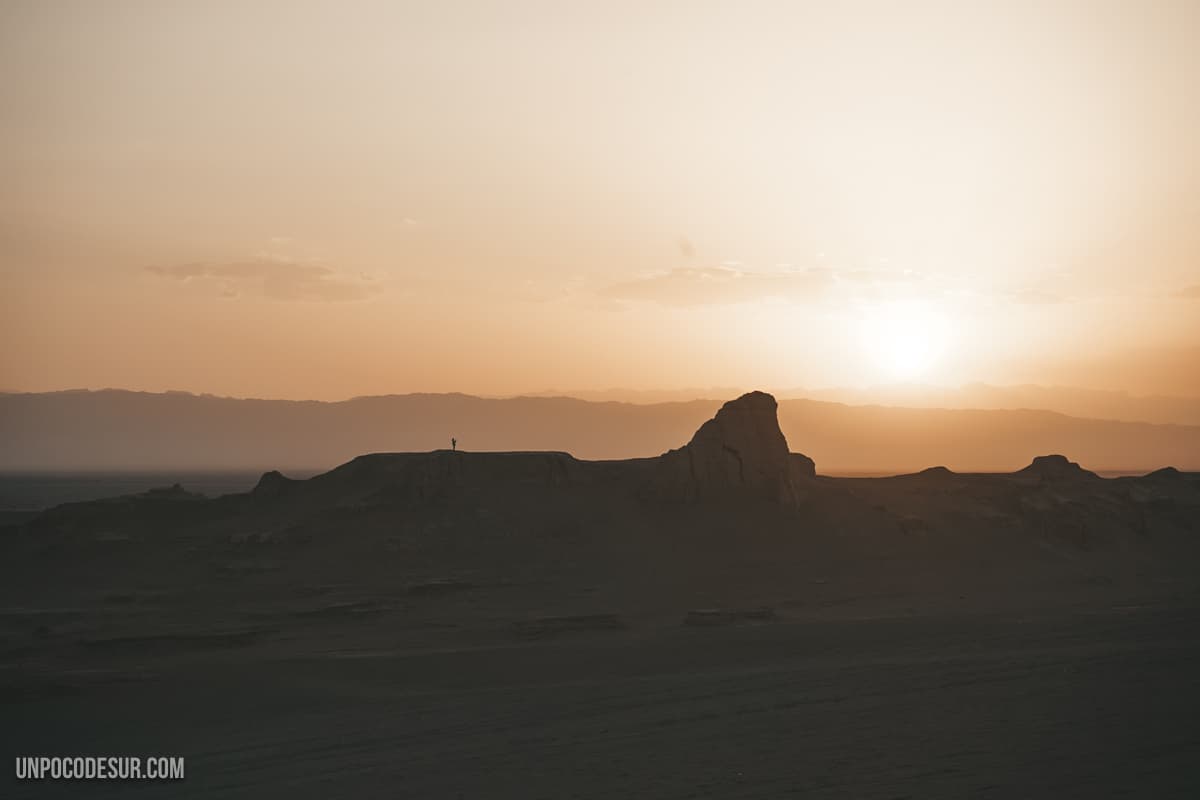 We arrived late in the afternoon when there was still a tiny ray of sunshine and we enjoyed how it got lost behind the Kalouts. The timing was perfect, we could also wander around a little before it was totally dark. Finally, after doing some photos we sat on a stone to see the sun fall and shortly before there was no light left we went back to the car with Majid who left us in a small hotel next to the area.

Sakine and Mustafa run the tiny desert hotel and had dinner ready for us as soon as we arrived. The hotel had a beautiful inner courtyard that at night and offers air conditioners in Iranian style (when you see them you will know what I’m talking about). Dinner for both was included in the 1.200.000 we paid for the room, just like the breakfast for the next day and believe me, that although at the time it was out of our budget, after meeting them we were delighted to have been there and contributed something to their little business. 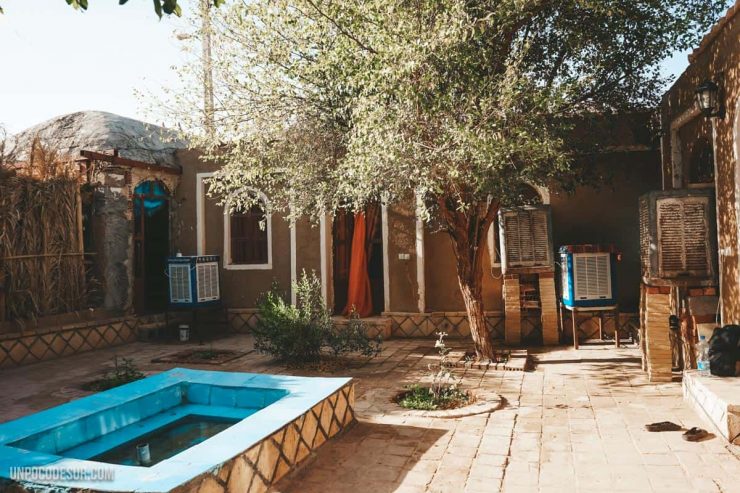 While dinner we had the pleasure to talk to them and another group of tourists who had a horrible day, their car broke down in the middle of the desert that morning and had to spend the half-day hours “hiding” from the sun lifting temperatures above 50 degrees Celsius. After food and already tired we left a note in the visitor’s book (where we also found another note of someone we know) and we went early to sleep.

The next morning we woke up about 5 am, we had breakfast and went out with Majid in the car on the way to the desert. We got there still at night and with the phone lights help we started to climb the points that we already knew more or less from the night before to enjoy the sunrise. Little by little the light started to appear and immediately we noticed the temperature increase, we were several hours in the place and finally at 9:30 in the morning the heat was already a problem, we jumped in Majid’s car. The water we had stored in the car was already hot and it was time to leave before things got worse. 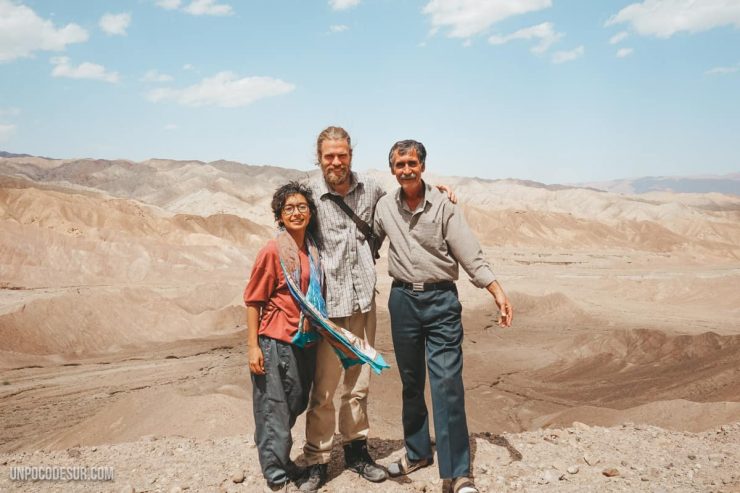 After we left we visited the rainbow mountains before returning to Kerman, by then Majid was already one more in the group. When we got to Kerman we put together 300.000 extra rials as a tip and said our goodbyes with a hug. From there we went straight to the bus station where we took a night bus to Bamm the last stop in the country. From there we started the longest and most intense border crossing in the world, the border crossing by land from Iran to Pakistan.